We stumbled into Edmonton the week of the largest Fringe Festival in North America. Dramas, musical shows, gymnasts, performance artists, comedy, jugglers, and on and on. Hundreds of shows in dozens of venues over a 10 day run. 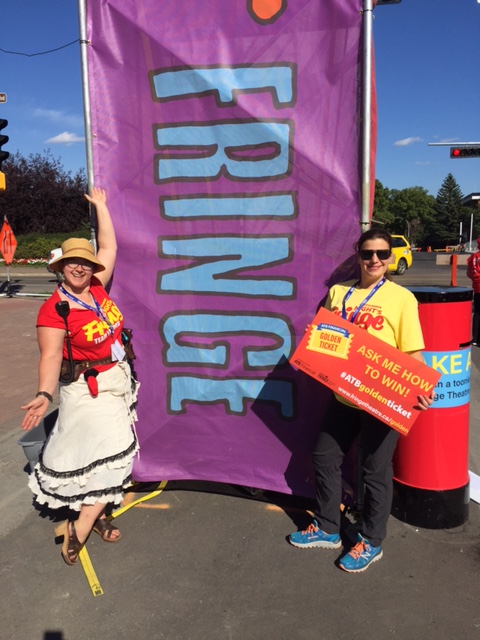 The shows ranged from serious to hilarious, moving to quirky. All for a nominal admission or a donation. We went to The Canada Show-A Complete History of Canada in One Hour:

We learned that Canada’s history is as screwed up as the USA’s. Except that after fighting other people to the death, Canadians say “Oh, sorry.”

The “Bagpiper with African Drummers” was a seriously quirky act and therefore meets the minimum standards for this dispatch: 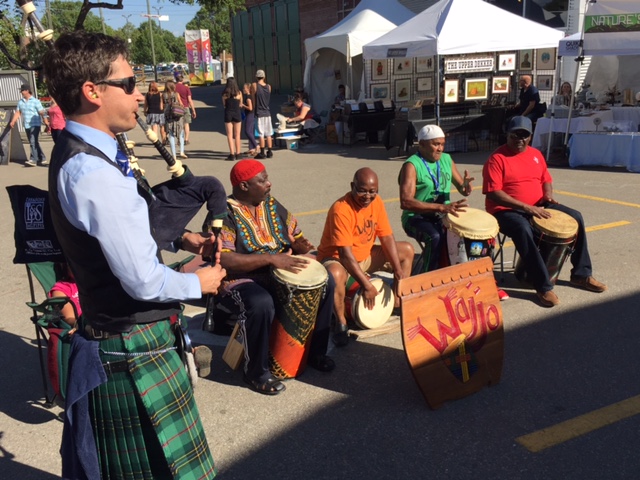 Edmonton is the northernmost large city in Canada. I don’t actually know if that statement is true, but I doubt that anyone reading this would know otherwise. Anyway, if you are living in a city that is that cold – and I have no idea why you would want to – the best things in life are…inside. So Edmonton has a huge number of theaters and other inside venues for winter entertainment, winter being defined as late August through early July. It also has the largest indoor shopping mall in the world, which we somehow skipped and therefore still had money for dinner that night.

One indoor highlight is the Muttart Conservatory – a botanical garden featuring plants from all over the world in four glass-covered pyramids. Auto-correct wanted to change the name to Mutant Conservatory, and honestly that might have been even more interesting, but it was worthwhile even as it was.

One pyramid was all decked out for Canada’s 150th anniversary:

McKenzie pointed out that the topiary behind her is a rainbow trout made of succulents:

I know, you have to look really hard to tell it is a fish not a banana with eyes and things growing on it, but it was a an impressive effort. McKenzie is a kinesiology major, which she chose because some part or other of her body is messed up. I told her I had been a psych major for a brief period because I wanted to find out why I was so screwed up. I am hoping she has better luck than I did.

So far, this blog is a failure as far as my grandkids are concerned, because I have said not one word about animal butts or poop. I am hoping this picture of  T-Rex sneaking into the conservatory will give me a brief reprieve:

6 thoughts on “Dispatches from the Field: Life on the Northern Fringe”