Notwithstanding the photos and video clips you see from RV company ads, it is rare to have a campsite that is honestly on the waterfront. Above is the view from our campsite in PEI. The picture at the end of this dispatch is also from our campsite. We enjoyed our time there so much we added some extra days, one of which involved staying at the campground and just enjoying the view. For those who know me, this is rare.

Knowing I was heading to Prince Edward Island (known officially as “PEI”), avid reader and fellow jazz aficionado Joe writes: “I lost a stash of weed in a campground on PEI in 1977. I appreciate your keeping an eye out for a silver tin and a pack of Zig Zags.” The loss apparently still hurts as he followed up with a further email after I agreed to take on the search: “Ok. I seem to recall the tin was packed with the finest Hawaiian weed available on Berkeley’s Telegraph Avenue. God how I missed that, and it impacted the general tone of the rest of my cross country trip. My buddy and I had to rely more frequently on Strohs and Old Overholt for our kicks after our great loss.”

More about the search later, but whereas we couldn’t find enough to do in other places, we could easily have stayed in PEI another week. We didn’t even get to spend any time at the Art Gallery, or the Museum, or attend a couple of other plays that looked interesting, or get to know Bill the actor/story-teller/playright who goes around town, coffee shop to coffee shop, with long, scraggly, graying beard and hair, and wearing only a robe and sandals, referring to the pastries he wants to purchase as “bird droppings.”

But we did meet Paul, a semiretired software engineer, now a consultant helping startups who works with a business incubator down the street. He is a business powerhouse, having managed a number of Nasdaq companies, but fell in love with PEI. Why? “It’s small, only 135,000 people on the entire island, and only 35,000 in Charlottetown. People care about each other.” He lives on the north edge of the Island, along the Gulf of St. Lawrence. “Friends often get together for dinner at each other’s homes. Last weekend there were 14 around our table. Tonight there will only be 8.” He doesn’t mind the weather, despite the howling 60mph/100kmh winds coming off the St. Lawrence in the winter. 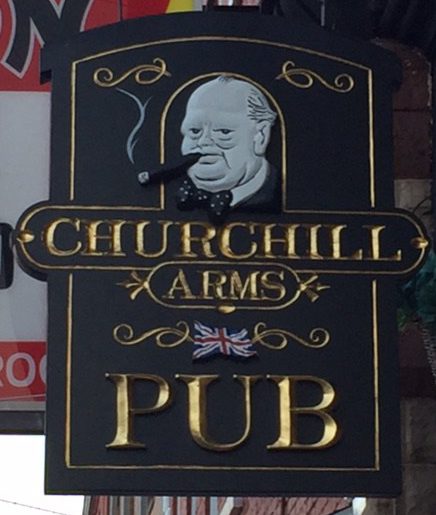 We met Paul at the best curry place in Canada – Churchill’s Pub. There were four curries to choose from. We ordered two – both great. But what got Churchill’s into the Canadian foodie show “You Gotta Eat Here” was their Deep Fried Mars Bar. I’m a big fan of Winston Churchill. My favorite speech by anyone was his speech at the beginning of WWII to a graduating class somewhere, where he got up to the podium, paused, looked around and said in its entirety, “Never give up, never give up, never, never, never, never give up!” And he sat down. My kind of guy. 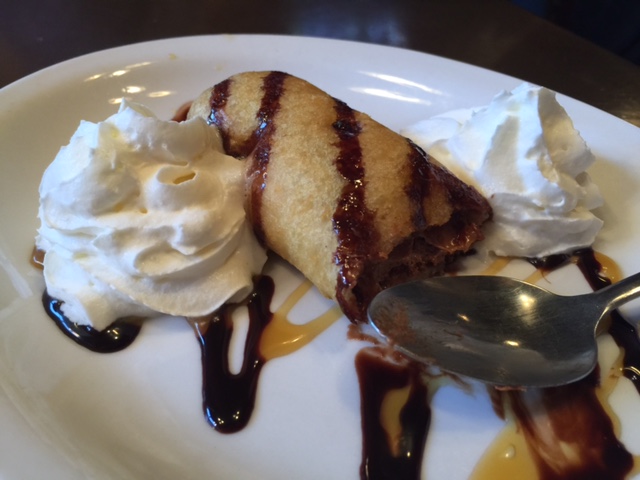 We also met Hamad. Having been immensely disappointed in the fish ‘n chips served at Jungle Jim’s in Fredericton (my fault – who else would order fish ‘n chips at a chain called Jungle Jim’s?), we went to Brit’s Fish ‘N Chips in downtown Charlottetown. We immediately noted by his accent that our server was 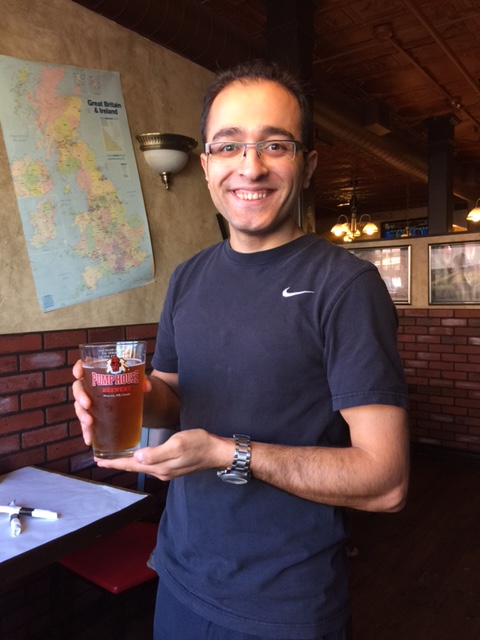 not British. He volunteered that he was from E-Ron. “You may know it as Eye-Ran.” He came to Canada 10 years ago with his family, but it took them 13 years of effort before that to gain admission. He started working at the fish ‘n chips store with his brother, then when the owner decided to sell, the family bought it. There were lots of choices on the menu but I asked for the traditional fish ‘n chips and a beer. He asked where we were from? I said Oregon. He said “most Americans think Canadian beers are…” and he paused, hesitant to continue. I said, that’s OK, tell me. “Cat piss.” So I ordered a pint of cat piss, and here is Hamad presenting it to me. As cat piss goes, it was not too bad. A bit mild, not too hoppy. Your standard yeoman cat piss.

Of course, PEI is all about Anne of Green Gables, and we went to the Anne Museum, the Anne National Park, and one of two Anne plays then playing. Not having done my homework ahead of time, I had not read the book. Or books. I guess there were a bunch. But I found one thing very interesting. The guide at the Anne Museum said they rent out the place for weddings of “Canadian and Japanese couples.” I asked why the reference to Japanese couples as compared to any others. “Green Gables was translated into Japanese just after WWII and proved to be very popular among Japanese women. Anne was a strong, and independent woman, and this resonated among Japanese women whose culture did not encourage that independence.” While we were there, at least half the people attending were Japanese. Here is a picture of the Green Gables house: 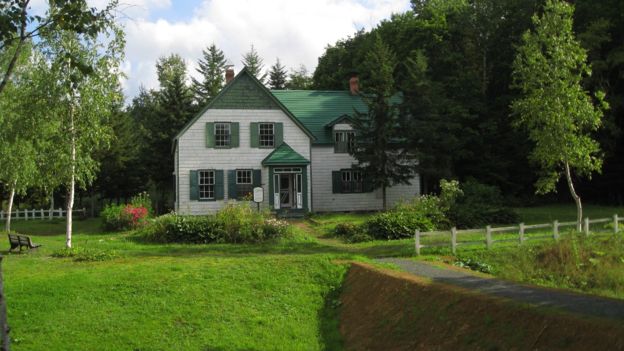 Not the real one mind you, but an exact replica built in Japan and one of the most popular tourist sites there.

The drive out to the Green Gables area took us through many picturesque villages, and with some effort we finally made it to the north shore, and saw the Gulf of St. Lawrence: 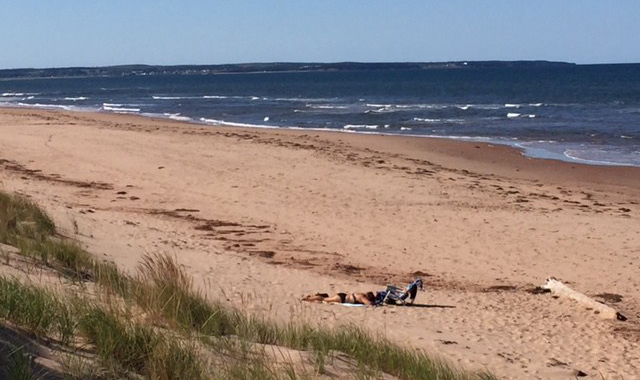 Charlottetown is historically significant to Canadians. It is where delegates from the various colonies north of the US gathered together in 1864, and agreed to create the union we now know as Canada. This was all very dry stuff when I attended Canadian schools when I was young. It would have been way more interesting had I known the truth. In fact, the meeting was only for delegates from Nova Scotia, New Brunswick, and PEI, but politicians from what we now know as Ontario and Quebec crashed the party. They wanted something bigger and better – a new country to be called Canada, consisting of all of their collective territory. With crates of champagne to drink, the delegates spent more time at the banquets and on the dance floor than in meetings. The “Canadians” wined and dined the Maritimers for 8 days, basically wearing them out, until they realized this could work out for their benefit. Either that, or they agreed in order to get the Canadians to go home. The conference ended with a grand ball that lasted into the wee hours. Finally, at 4am, a procession of undoubtedly very giddy politicians marched down the main street to continue the celebrations aboard the SS Queen Victoria. Think how much could be accomplished these days if politicians actually partied together!

Back to Joe’s missing silver tin. Despite an intense search consisting of me standing at our campsite and looking around with my head down, Joe’s tin remains at large, but I did notice that the people at the campsite four down from us were very, very mellow. 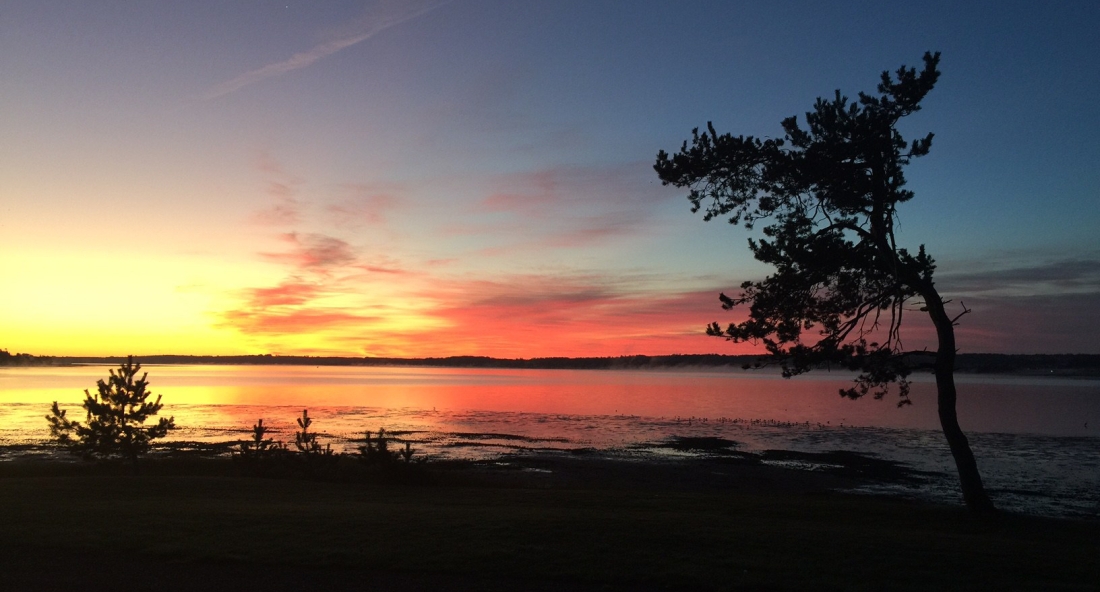 2 thoughts on “Dispatch from the Field: PEI and the Search for the Silver Tin”