Had my initial experience with people from Halifax been otherwise, I might have immediately concluded that Halifax is a really cool town. See: Dispatches from the Field: Calgary – What is Hip?

After all, Wanda (whose real name is Kate but inexplicably changed her name) at Second Cup made sure I knew about all the great places to go in Halifax. Great live music at the

Carleton, creative cocktails at Lot 6, the longest civil rights protest ever in Africville. I told her she made me feel at home with her wild hair color and tattoos, Portland being a haven for both. She has a young daughter about 8 years old, who shares the same fiery hair color, but no tattoos as yet. Another barista, also named Kate, who did not change

her name, reminded me in her mannerisms of my non-Kate daughter Jen (real name Jenny), and this Kate also wanted to make sure I knew all about their town. I always seem to find a home base, usually a coffee shop, where I can work on this blog, catch up on emails, read the news (which is inevitably about Trump, Trump, Trump, even in Canada) until I can’t take it anymore, and if I am lucky I will meet someone helpful like the two Kates. No, if my first interaction with the people of Halifax was with Wanda Kate and Kate, I’d have loved the town from the outset.

But my initial experience in Halifax was just sour enough that it took a day or two to realize that Halifax was a very nice city. And it wasn’t the drivers blasting around the motorhome, or cutting me off, or otherwise driving aggressively as I was trying to find the campground. As readers of last year’s dispatches will recall, Canadians do all of these things, but they are always smiling politely as they do them.

No, it was the initial experience at the campground that did it. First, as I parked to register in a two lane area, there was a big, black pickup parked going the wrong way, blocking one of the two lanes. Some of you may know that I have a thing about big, black pickups, or at least the people that seem to want to drive them. Not all of them, mind you. My good friend, avid reader, and retired airline pilot Randy drives a big black pickup, and Randy is one of the absolutely nicest guys you would ever want to know. Really, you ought to try to get to know him. And my other really good retired airline pilot friend, avid reader Paul, has a son in law who drives a big black pickup and I know personally that he is a really nice guy. But for some reason, regardless of country or other geography, if you someone cuts you off, tailgates, or otherwise drives aggressively towards you, the odds are 50/50 or better that he is in a big black pickup. Unless you have just crossed into Fresno County, in which case the odds are 100%. Check it out. Every time. Bank on it. So when someone is parked the wrong way, blocking the only lane allowing access to the campground now that I am doing the mandatory stop and register routine, it did not particularly surprise me that it was a big black pickup.

Walking in and saying hi to the nice woman at the desk, I noticed two men, one older and one younger, slouched on a sofa and easy chair respectively, dressed in full camo and looking about as sullen as one could imagine. I quickly determined that older camo-man was the father of younger camo-man, and that the nice lady was the wife and mother, respectively, and whom I came to pity. I requested a site that was satellite friendly, saying I wanted to watch the Green Bay Packers game that evening. Grumbled one camo-man to me: “They’re all takin’ a knee tonight.” Not wanting to get into a political discussion, this blog being a Politics-Free Zone, I simply replied “yep, that’s freedom.” I then overheard the other camo-man say to the first under his breath: “one of THOSE.” Apparently “freedom” was not a popular concept among Canadian camo-men that day. It shall come as no surprise that the big black pickup was that of one of the camo-men.

That night the Packers locked arms, did not kneel, and won their game, so perhaps all was well in camo-land after all, but it bothered me that in Nova Scotia I could not simply get a campsite without having to be confronted with the detritus of US politics.

But thanks to Kate and Kate, I came to appreciate others from their community, and ultimately became a Hali-Fan. It turns out Halifax has a rich history, mostly involving the tragic loss of life and/or destruction of property.

Case 1: During WWI, a munitions ship and a Belgian relief ship collided in the narrowest area of Halifax Harbor (aka Harbour), appropriately named The Narrows. No explosion. That happened an hour or two later when the crippled munitions ship, by then on fire, hit the shore. A large portion of Halifax, primarily along the waterfront, was incinerated and thousands died.

Case 2: When the Titanic sunk, the deceased were all taken to the nearest port, Halifax. The survivors were picked up by a nearby ship, the Carpathia, and they sailed on to New York, but Halifax became the largest morgue in the world. Fun fact: First class dead passengers were removed in coffins. Second and third class passengers were taken off in canvas bags. Think of that next time you think about saving money on your next cruise.

Case 3: There are over 10,000 shipwrecks in Nova Scotian waters, though some think the total might be as high as 25,000. Each red dot below is a shipwreck – so many it looks like a red line around the entire coastline.

Case 4: The Black neighborhood of Africville, founded centuries ago by former slaves who were freed when they fought for the British during the American Revolution, was destroyed in the 1960’s in the name of urban renewal. The residents were relocated, their possessions transported with exquisite symbolism by city garbage trucks. One resident, Eddie Carvery, returned to Africville in 1970 to protest the loss of his home and community. He has never stopped. This photo shows what remains of Africville:

In the distance just beyond the park you can barely see four trailers, and Eddie’s is the one on the right with the tattered sign “Africville Protest.” In 2005, the city of Halifax formally apologized and built a museum:

Halifax turns out to have a thriving cultural scene, and some very interesting stores, including one catering exclusively to women called Venus Envy: 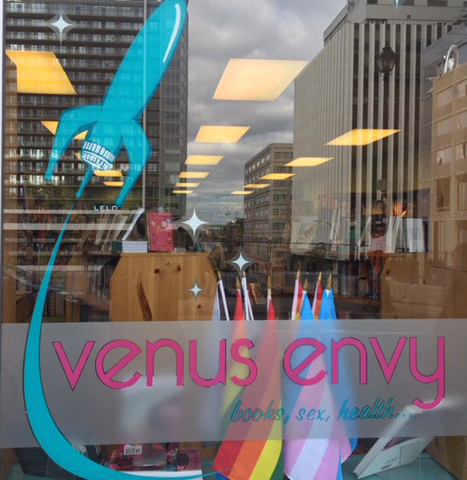 I do not know what that means, but stayed clear anyway. In addition to an array of museums and art galleries (including the Canadian Immigration Museum, a concept that would somehow seem more appropriate in the States right now), I saw a poster for the most unusual poetry reading I have ever come across: 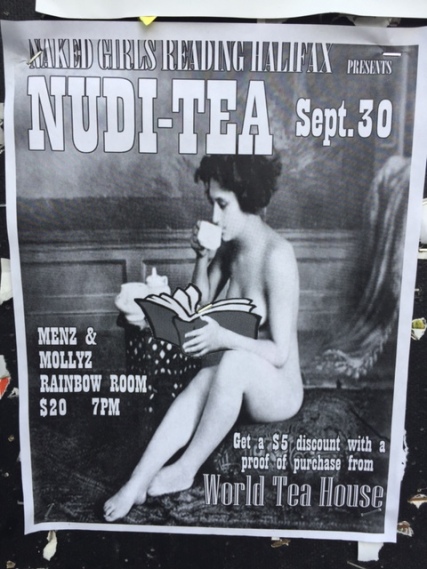 Having already bought tickets to the Thom Swift gig at the Carleton, we had to skip Nudi-Tea, but enjoyed our time with the singer-songwriter who reminded us of another Canadian balladeer, Gordon Lightfoot: 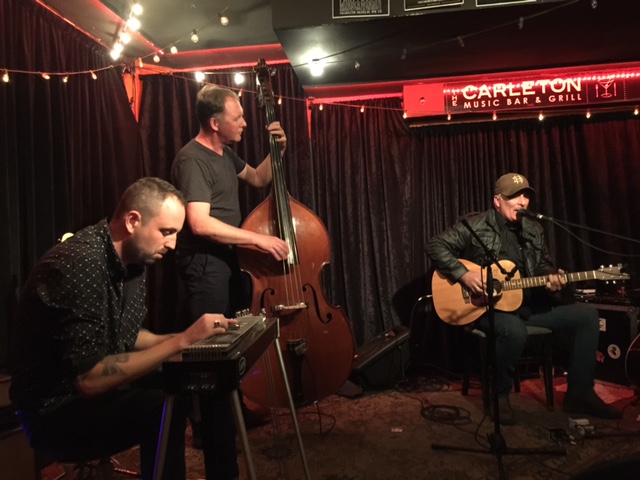 So Halifax turns out to be a fun place, as long as you don’t talk about football and try to stay out of the way of big black pickups.

2 thoughts on “Dispatch from the Field: Canadian Rednecks, and the Tragic Loss of Life and Property in Halifax”